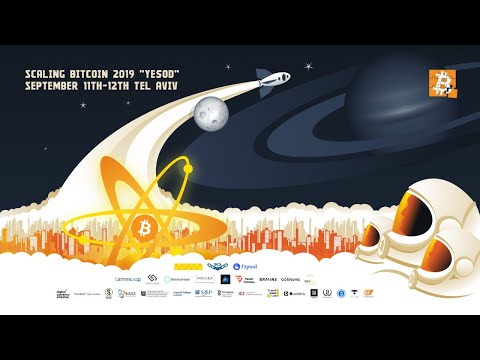 For anyone who still hasn't seen this, here is Peter Rizun and Andrew Stone presenting their research on how to do 1 gigabyte blocks, all the way back in 2017 at the Scaling Bitcoin Conference. The BTC camp has known we can scale bitcoin on-chain for years, they just don't want to hear it.

Peter Rizun, Andrew Stone -- 1 GB Blocks on Testnet... Gigablocks were already being tested back in 2017. Great speech from the 2017 "Scaling Bitcoin" conference.

Our own Peter Rizun and Andrew Stone, speaking at the 2017 "Scaling Bitcoin Conference" just prior to the BCH split, explaining how we get to 1GB Blocks and beyond!

Look at what the bartender was wearing at the place holding the Bitcoin Core meetup in Tokyo after Core’s big (not) Scaling Bitcoin conference.

What are your thoughts on 'Graphene' discussed at the Scaling Bitcoin Conference?

What was the most important thing that came out from the Scaling Bitcoin Conference that has just finished?

At the scaling bitcoin conference day1

I have to say, the level of disrespect is outstanding.
The conference started off with a joke on 'bcash' and also joked about BitcoinXT, bitcoin classic and bitcoin unlimited in the same sentence.
For a conference which clearly made a statement that this is about engineering and not politics, the satirical content was up there.
Then when the bitcoin unlimited team spoke, you could pretty much feel the tension in the air.
Pretty sure only Tony got to ask a few questions out of spite, and I'm glad question time got cut.
Well done BU team and nchain on the hard work proving we can scale on chain.

Thoughts on day 1 of the Milan Scaling Bitcoin conference.

I just got back from day one of the conference. Everybody else went to a bar to drink and eat, but since I'm still jet lagged I came back to my hotel to get some rest.
I was also at the "Satoshi's Vision" conference about 2 weeks ago, and the two conferences are very different in many ways.
First off, the vibe here seems much more social. It seems that most people that are here are well connected socially. There are hardly any "loners" here. Contrast this to the Satoshi's Vision conference where most people there had never met anyone else there before.
During the presentations, a lot of people seem to be not paying very much attention. A lot of people are on their computers and not really listening to the speakers. I also hear a lot of chatting amongst the attendees. At the Satoshi's Vision conference, I got the feeling most people were there to listen to the speakers, and social fraternizing was not on the top of anyone's reasons for being there.
During the breaks, everyone would go outside to the snack tables and chat with each other. There is a lot of chatter. Everyone is talking with everyone else, and there is a high level of noise. When I say "noise" I don't mean people are being loud, the noise comes from so many people talking. After the break is over, people file back into the conference room, and the speaker has to quiet down the crowd before the speakers can begin. "Ladies and Gentlemen, can I have your attention.... We would like to get started....Can I have your attention..... Please everyone get seated.... Please take your seats we are about to get started". I don't mean to be demeaning, but it kind of reminds me of school children coming inside after recess. It takes a while for people to calm down and get ready to listen, everyone's conversations continue until the MC can get everyone to shut up. Maybe this is a function of the Scaling Bitcoin convention being much larger (almost 10x as many people are here as there were at Satoshi's Vision).
The content of the presentations seem to be loosely scaling related. Maybe Day 2 will have more scaling content, but today hardly any scaling content. For some reason, there was a lot of talks on fungibility and there was even a presentation on Timestamping. What does timestamping have to do with scaling? It seems like these Scaling Bitcoin" conferences are turning into general bitcoin presentations, not strictly scaling related. This is a stark contrast to the first Scaling Bitcoin conference which was pretty much completely blocksize limit proposals (BIP100, BIP101, BIP102, etc).
Also, it seems that there is very little new information coming from the presentations. The LN talks sounds like every previous talk on the LN. The Sidechain presentation sounded like it could have been the exact same presentation given 3 years ago. Very little progress seems to have been made in these areas. At least at Hong Kong segwit was announced, which added an air of excitement. This time around there isn;t hardly any excitement for any breakthrough.
Overall, the day was pretty boring. I'm not particularly interested in making friends here, as I'm not interested in BTC for social reasons. I'm only here to feel the vibe and get a more close up look at everything plays out.

Was there any consensus or any tangible outcome from the scaling bitcoin conferences?

Replace "math" with "Bitcoin", and you get a pretty good summary of the Scaling Bitcoin Conference so far...

Call for Proposals! For the second phase of Scaling Bitcoin conference in Hong Kong

Look at what the bartender was wearing at the place holding the Bitcoin Core meetup in Tokyo after Cores big (not) Scaling Bitcoin conference.

Look at what the bartender was wearing at the place holding the Bitcoin Core meetup in Tokyo after Cores big (not) Scaling Bitcoin conference.

Jeff Garzik on Sep 16 2015:
During Scaling Bitcoin, Bitcoin Core committers and notable contributors
got together and chatted about where a "greatest common denominator" type
consensus might be. The following is a without-attribution (Chatham House)
summary. This is my own personal summary of the chat; any errors are my
own; this is not a consensus statement or anything formal.
transaction size within block by applying a delta to transaction size based
on the amount of data added, or removed, from the UTXO set. Fee is then
evaluated after the delta is applied. This aligns user incentives with
UTXO resource usage/cost. Original idea by gmaxwell (and others??).
fork to modify block size limit regime to be cost-based via "net-utxo"
rather than a simple static hard limit. 2-4-8 and 17%/year were debated
and seemed "in range" with what might work as a short term bump - net after
applying the new cost metric.
fork Y months in the future. Set high bit in version, resulting in a
negative number, to more cleanly fork away. "miner advisement" - miners,
as they've done recently, signal non-binding (Bitcoin Core does not examine
the value) engineering readiness for a hard fork via coinbase moniker.
Some fork cancellation method is useful, if unsuccessful after Z time
elapses.
a bit in version, and then triggering a fork'ing change once a threshold is
reached.
Chat participants are invited to reply to this message with their own
corrections and comments and summary in their view.
For the wider community, take this as one of many "inputs" described at
Scaling Bitcoin. Over the next few months developers and the community
should evaluate everything discussed and work towards some concrete
proposal(s) that are implemented, tested and simulated in December in Hong
Kong.
-------------- next part --------------
An HTML attachment was scrubbed...
URL: <http://lists.linuxfoundation.org/pipermail/bitcoin-dev/attachments/20150916/b53805a1/attachment.html>
 original: http://lists.linuxfoundation.org/pipermail/bitcoin-dev/2015-Septembe011031.html

Which of the Scaling Bitcoin conference sponsors are pro-BP101?

Question as above.
Shame to see that Thermos is also a sponsor.

More than 70 speakers are joining Bitcoin Cash this August 1st for an online conference that aims to chart a path forward towards scaling and mass adoption for the top-5 cryptocurrency.Join us as a viewer, ask questions or even as a panelist or speaker. Scaling Bitcoin started in 2015 with the underwriting support of Massachusetts Institute of Technology, Chaincode Labs, Chain and Blockstream.. The conference was largely organized by the Bitcoin development community with a lot of help from the members of Bitcoin Developer meetups.The goal was to create an event focused on an academic approach to software development surrounding the Bitcoin ... Scaling Bitcoin Workshops are focused on raising technical awareness of scalability issues, simulations and proposals to improve scalability. Conference participants want this event to be entirely focused on the science and engineering, which is how Open Source Software development has proven to deliver excellence. Bitcoin 2020 is coming back to San Francisco, this time with more attendees, more fun and more Bitcoin. ... 100 speakers and 70 companies came together for the Bitcoin 2019 conference, asking and providing answers to the question: ... We're scaling the Bitcoin Art Gallery and inviting all of your favorite artists to rethink how we look at BTC. Scaling Bitcoin Workshops FOR THE ENGINEERING AND ACADEMIC COMMUNITY. In early 2015, the Bitcoin development community faced difficult discussions of how to safely improve the scalability and decentralized nature of the Bitcoin network. To aid the technical consensus-building process, we organize workshops to collect technical criteria, present ...

CoinGeek Toronto Scaling Conference, BitcoinSV DREAM BIG CoinGeek. ... Japan Blockchain Conference: ... Bitcoin At $1 Million By 2020 Is Still Possible And Might Be A Discount Says James ... Bigger blocks, massive scaling, and no limits was the theme of the CoinGeek Conference Toronto 2019, where all Bitcoin professionals gathered to talk why massive on-chain scaling is essential for ... Talk at the Stanford Blockchain Conference 2020. Talk at the Stanford Blockchain Conference 2020. Skip navigation Sign in. Search. ... Scaling Bitcoin by 10,000x Lei Yang. ... Bitcoin's Lightning Network Explained For Dummies! Will This Solve Bitcoin's Scalability Problem?! - Duration: 10:57. Bitcoin for Beginners 3,194 views BCH:Scaling the Globe: 2020 Bitcoin Cash Conference & ForkDay Celebration ... 50 speakers are joining Bitcoin Cash this August 1st for an online conference that aims to chart a path forward ...